Although certain other laser types may be used with LIBS, the laser of choice is often the ubiquitous Q-switched Nd:YAG, which is available in various forms from a number of manufacturers and which are in widespread use in many industrial, scientific and medical applications.  A key requirement of the laser and associated optical transmission system is that the power density at the sample surface is sufficient to produce both ablation of the sample and the formation of a luminous plasma.  Typical power densities used in LIBS range from approximately 0.5 to 5 GW cmˉ².

Examples of commercially-available Q-switched Nd:YAG lasers suitable for LIBS
It should be noted that when operating at the lower end of this range, in certain cases (e.g. a solid metal sample such as nickel) it is possible to produce a plasma at a power density below the threshold required for sample ablation.  Under these conditions, the recorded emission spectrum is dominated by i) the gas surrounding the sample (usually air but sometimes argon) and ii) surface contamination (dirt) and/or oxide layers on the surface of the sample.  The spectra may contain only weak or sometimes no emission lines from elements contained within the sample itself (i.e. the substrate) and hence is of no value when attempting to determine the composition of the substrate material.  It may, however, be very valuable if the requirement is to analyse whatever is on the surface of the sample.
It can be seen in the following LIBS spectrum of high-purity nickel that the recorded spectrum is dominated by emission lines arising from surface contamination (e.g. NaCl, CaCOз) and atmospheric air (nitrogen, oxygen and water).  Some Ni emission lines can be seen in the spectrum but they are generally weak compared to the emission lines arising from the surface contamination and atmospheric air.

LIBS spectrum of high-purity nickel in air using a relatively low laser beam power density (< 1 GW cm ̄ ²)
At higher laser beam power densities, the LIBS spectrum of high-purity nickel is dominated by emission lines of the substrate (i.e. nickel).  Even at higher laser beam power densities, it is normal that the first few laser pulses directed at any one position on the sample will include emission lines from the surface contamination but these will decrease in intensity as each successive laser pulse removes the surface contamination from the surface of the nickel sample.  This is explained in more detail below.  Emission lines from the surrounding gas (in this case atmospheric air) will continue to be seen in the recorded LIBS spectra.
Optical spectrographs suitable for LIBS are also available commercially from a number of manufacturers but are usually of the Czerny–Turner configuration and equipped with an Intensified Charge-Coupled Device (ICCD) array detector.  Within the last fifteen years or so, however, the so-called echelle spectrograph has become available in a form suitable for LIBS.  The echelle design has the advantage that a broad-band spectrum (typically 200–900 nm) may be recorded in high-resolution for each laser plasma event, whereas this is usually not possible with other spectrograph types unless multiple devices are used (i.e. a multi-channel optical spectrograph).  Echelle spectrographs often suffer from relatively low optical throughput and are expensive, especially if used with an ICCD detector.  An electron multiplying CCD (EMCCD) detector can offer a lower cost and more robust alternative to an ICCD detector and so are now being used by some manufacturers of echelle spectrographs.
Although not always essential, it is very much the norm to use a time-gated detector with LIBS - the historically preferred method of gating being to electronically control the intensifier of an ICCD detector although adequate time-gating is now possible with non-intensified CCD and CMOS detectors.  The instantaneous temperature of the LIBS plasma can easily reach 10,000 K during and immediately after the laser pulse (which is typically 3–10 ns in duration), and the optical emission from this hot and dense plasma is dominated by Bremsstrahlung radiation which manifests itself as a broad continuum in the recorded emission spectrum.  Time-gating the detector with respect to the laser pulse may be used to allow sufficient time for the plasma to expand and cool to a point where the Bremsstrahlung radiation is no longer dominant over the atomic and ionic emission lines arising from excited atoms and ions present in the plasma.  The optimum time delay is typically 1 to 2 μs although this can vary depending upon many factors including laser wavelength, power density at the sample surface, sample composition and physical state, ambient gas pressure etc.  It is usual to optimise the delay time for a given LIBS instrument configuration, measurement conditions and material type.  The time gating capability of the detector(s) also offers a convenient method of selecting a detector gate width (integration time) which provides adequate signal-to-noise while minimising the contribution to the recorded spectrum from ambient light.  Typical integration times used in LIBS range from about 10μs to as much as 1 ms.

Effect of integration delay on acquired spectra
Several manufacturers are now offering compact, low-cost, spectrometers equipped with CCD or CMOS array detector which are suitable for LIBS.  The detector arrays used in these miniature spectrometers are not of the intensified type but a limited time-gating capability is possible using the detector electronics and so they are useful in some applications of LIBS, especially where robustness and portability are important.  In recent years the use of CMOS detectors in these compact spectrometers has allowed delays down to about 0.9 μs (down to 0 μs with pre-triggering of the laser) and integration times from 10 μs, which is approaching the capabilities of an intensified ICCD detector and certainly sufficient for most LIBS applications.  Due to their low cost and compact size, it is possible to stack several of these spectrometers together so as to allow the recording of broad-band, high-resolution spectra from a single LIBS plasma event.  They therefore offer an alternative to the more expensive echelle / ICCD or EMCCD array detector spectrographs.

6-channel (left) and 8-channel (right) multi-channel LIBS spectrometers.  May be supplied with as few as one spectrometer channel if required.
The measurement methodology adopted in LIBS will to a large extent depend on the nature and requirements of the application.  Quantitative measurements using LIBS require a carefully thought out methodology if a reasonable level of precision and accuracy is expected.  For most cases, it is necessary that the bulk material is homogenous on the sampling scale of the laser beam, which is most usually very small (for solid samples such as steel, typically a few hundred μm in diameter by a few μm in depth per laser pulse).  Although it is usual to record spectra from a relatively large number of laser pulses in order to achieve adequate signal-to-noise, it is sometimes possible to use just one laser pulse.  This is often the case when attempting to analyse surface residues, where multiple laser pulses would eventually remove the residue and expose the underlying material to the laser beam.

Cr calibration curve in steel and Cr content of the reference samples employed
(LOD = Limit of Detection, R² = closeness of trend line fit to data, where an R² = 1 indicates a perfect fit)
An often (over-) stated attribute of LIBS is that there is no need for sample preparation but this can be misleading.  LIBS is clearly a surface analysis technique and, accordingly, will provide information relating to the composition of the surface of the material under examination.  But the surface of a material is seldom representative of the bulk; more so if a surface coating, oxide layer or contaminant is present.  For analysis of the bulk material, clearly a degree of sample preparation is required, even if it is only a matter of allowing the laser beam to interact with the sample for long enough (perhaps several hundred laser pulses) to remove surface contamination and/or oxide layers before attempting to record spectra. 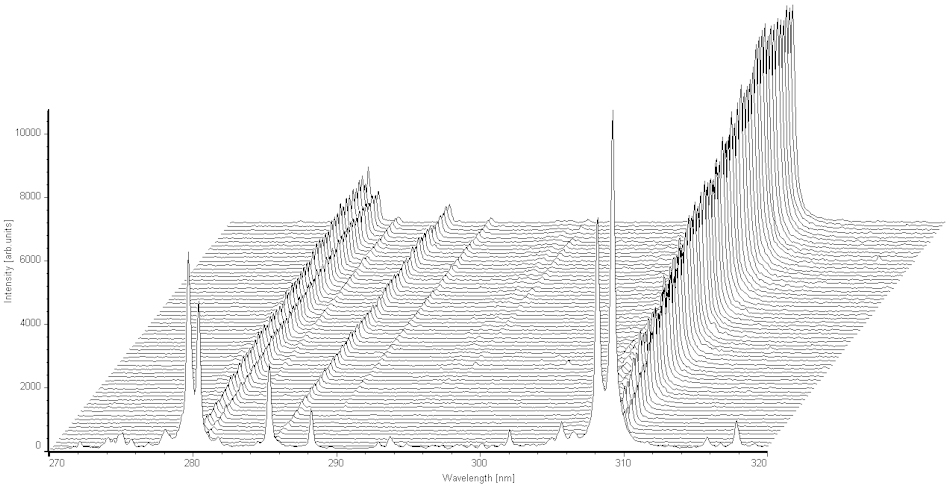 A series of single-shot spectra (60 in total, first in foreground) obtained from an aluminium alloy sample

Atomic and ionic emission lines identified in the first spectrum (corresponding to first laser pulse)
In the above two graphics, it can be seen that the spectrum recorded from the first laser shot (the first spectrum in the kinetic series graphic) is significantly more intense than those recorded in the next few tens of laser shots.  Furthermore, the first spectrum appears to contain emission lines not seen in subsequent spectra.  This can be explained in terms of the presence of a surface residue and/or oxide layer on the aluminium alloy sample which i) results in a relatively bright laser-induced plasma and ii) is influenced by the presence of other chemical compounds (e.g. NaCl, CaCOз).  On repeated exposure of the aluminium alloy sample to the pulsed laser beam, the overall intensity of the primary emission lines (Mg, Si and Al) increase and level off after around 50 laser shots.  Additionally emission lines from the surface residue become significantly weaker to the point that they are difficult to observe.  So clearly a dynamic situation exists with repeated laser shots at any one location on the sample and so this needs to be taken into consideration when interpreting the data arising from the LIBS measurement, especially so when attempting to perform quantitative measurements.  In practice, LIBS analysis of the substrate material always requires a certain number of conditioning or cleaning shots by the pulsed laser before recording spectra – for many solid materials it is not uncommon for some tens or even hundreds of conditioning laser shots to be applied prior to recording “analytically useful” LIBS spectra.
Another often stated attribute of LIBS is that it is fast.  This is usually true, and with LIBS one can generate at great speed an enormous quantity of data but care must be taken over the measurement conditions and methodology in order to yield analytically useful results.  With appropriate care, however, a measurement precision of better than 1% is achievable.  Detection limits vary significantly with the element of interest, the composition and physical form of the matrix and the design and sophistication of the LIBS equipment being used but are usually in the range 0.1–1000 ppm.
For remote LIBS applications, there are three general designs of LIBS instrument. The first is basically a telescope design, where the laser beam is transmitted to the sample via line-of-sight, the second design utilises a fibre-optic cable terminated with a remote probe to transmit the laser beam to the sample and the third design uses a remote probe containing a compact laser. We have used all three of these designs for our work for the nuclear industry, further details of which are available in the Services / Nuclear Industry section of our website.